Which LED Retrofit Makes The Most Sense?

LED lighting has ushered in a host of new approaches to creating commercial environments that are safer, more welcoming, and more productive for occupants. The fact that the fixtures are powered using low-voltage Direct Current is ushering in technologies that will transform lighting, and along with it most other building systems.

Most of our efforts to date have focused on converting our customers’ existing fluorescent and HID fixtures to LED. These conversions typically take the form of a new fixture. The exiting electrical infrastructure is undisturbed. We simply covert standard 120V AC to 24V DC at the fixture. 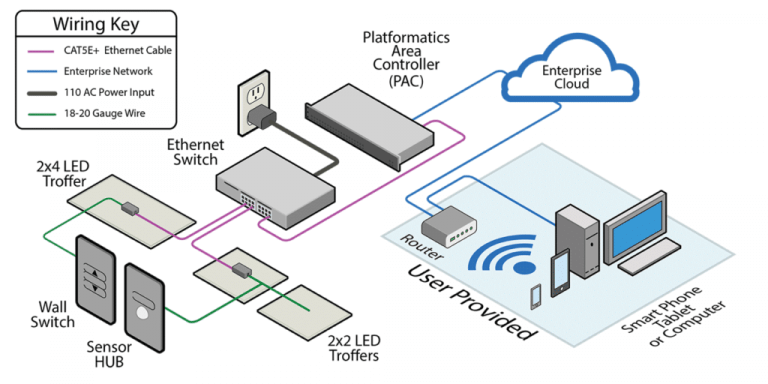 If, however, you’re planning a major upfit of an existing space or building, there are any number of other technologies that can be brought to bear. A little over a year ago Cisco Systems announced its Digital Ceiling initiative. An intriguing approach, it strives to connect all building services on a single converged IP network. Every building has multiple networks, including HVAC, security, building controls, etc. As building owners go through the process of switching to networked LED systems, the lighting solution will act as the aggregation point for all of these other building networks. The lighting network is the fastest way to create a Digital Ceiling, since lights are pervasive and spaced within eight feet of each other, making it the only viable system to act as a central connection point. The solution includes a number of sensors to monitor presence, temperature, natural light levels, and carbon dioxide. The sensor grid will provide rich data regarding building traffic, occupancy, and resource utilization.

We recommend the implementation of networked lighting control only when a major renovation is planned, because the cost of replacing existing electrical infrastructure is prohibitive. During an extensive fitup however, the cost of installing a Power Over Ethernet (POE) CAT6 cable plant to power and control the fixtures is easily justified. Cisco has developed network switches capable of delivering 60 Watts of Direct Current per channel. The typical switch powers 48 LED fixtures, most of which require 50 Watts or less. Platformatics, one of Cisco’s most promising controls partners, has developed a system that allows building managers to establish lighting policies that take into account occupancy levels and traffic patterns, and will automatically dim the fixtures as the amount of natural light in the room increases.